The term “smart city” has a different meaning for different people. For most, it conjures up a vision of a technologically-advanced metropolis, where citizens rely on smart gadgets to go about their daily lives. For others, the smart city concept describes government initiatives based on big data, technology and intelligent processes that improve the quality of life of a city’s residents. These aren’t incorrect definitions, they’re just two sides of a multi-faceted approach to urban development.

Technology and data are essential building blocks for creating a smart city. But it’s the city’s residents that can help enact the biggest changes. By introducing projects that focus on improving the lives of individuals and communities, smart cities can begin to grow on their own.

One of the most talked-about methods of transforming a city into a smarter city is by introducing 15-minute neighborhoods. More commonly known as a 15-minute city, or even a 20-minute city, these strategies focus on improving the lives of residents by making the city more accessible to everyone.

The City of Melbourne has visualized the features of their 20-minute city approach, as shown in the image below. 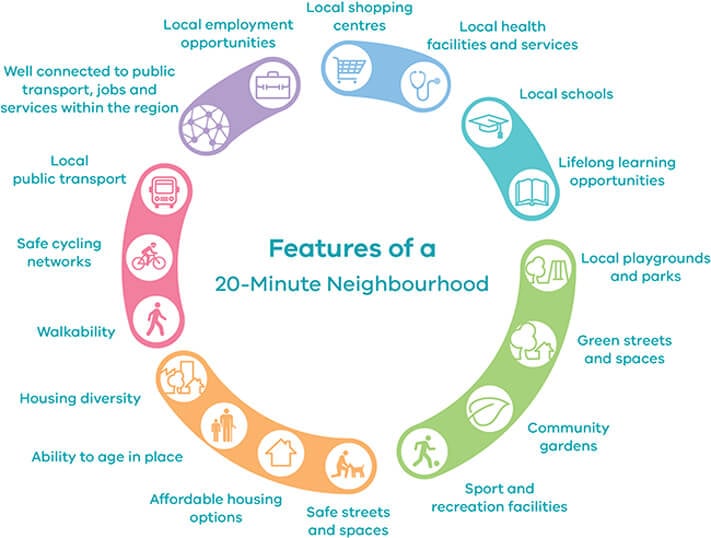 A 15-minute city is an urban planning strategy that’s aimed at improving the quality of life for city-dwellers. In short, the strategy focuses on meeting the needs of citizens by giving residents access to everything they could need within a 15-minute radius of their home. Workplaces, schools, healthcare, shops, restaurants, leisure facilities, and parks should be accessible to all members of a community. All within a 15-minute walkable distance.

Some cities are championing 20-minute city programs, but the principle is the same. It just has a wider radius.

Historically, cities evolved with clear separations between industrial, commercial, and residential zones. By separating residential areas from heavy industry, residents could enjoy cleaner air away from factories, and less-crowded living conditions. The cost of the separation was longer transit times and dependence on private vehicles and public transport for getting to and from work, for shopping, and trips into the city.

Today, cities have evolved even further. The industry has moved to the outskirts, and there’s no longer a need for a clear separation between commercial and residential areas. Yet the infrastructure still remains. This means that residents are still dependent on private and public transport to meet their needs.

By bringing residents' needs closer to their doorstep, it’s possible for cities to reduce reliance on automobiles. It would allow cities to re-purpose roadways and car parks for more community-friendly projects. This will make the city more accessible for everyone. By nurturing communities that have a vibrant mix of residential and commercial buildings, cities can reinvent themselves for a future that doesn’t rely on cars.

Why Is The 15-Minute City Important?

The 15-minute (or 20-minute) city is more than an urban planning experiment. It’s a practical solution to many problems facing municipal areas. Currently, climate change and greenhouse gas emissions are a hot topic for city development, and one clear way to make cities greener is to reduce resident’s dependence on private transport.

Repurposing roads into pedestrian and bicycle-friendly zones is one practical way of encouraging more residents to ditch their cars in favor of other transport methods. Narrowing roads, widening sidewalks, installing bicycle lanes, and improving public transport infrastructure is at the heart of the 15-minute city project.

By giving citizens safer walkways, cycle-paths, and more public transport options, it’s possible to phase out car reliance. This is important because studies have found that most urban car usage is impractical anyway.

In one study conducted by Carlos Moreno, a university professor and advisor to Paris Mayor Anne Hidalgo, 66% of all public space in Paris is reserved for cars. Private cars only move 17% of the city’s population. Of the cars noted in the study, the average vehicle only carried two passengers. Anne Hidalgo plans to develop Paris into a 15-minute city.

Amsterdam (read our city portrait of Amsterdam Smart City) has successfully removed 10,000 car parking spaces from the city center, and the results speak for themselves. Take a look in the video below.

By eliminating unnecessary traffic from urban areas, a city’s carbon footprint can be reduced significantly. The City of Eugene, Oregon, has a bold Community Climate and Energy Plan that has targeted the reduction of car usage. This is a key component in the city's carbon reduction strategy. To help improve the city’s livability, it plans to have over 90% of its residents living in 20-minute neighbourhoods by 2030.

While reducing a city’s carbon footprint is one goal of the hyper-local 15-minute city, it’s one of many benefits that it can bring to an area.

What Are The Benefits Of A “Hyper-Local” City?

The 15-minute city is full of possibilities. Aside from the obvious advantage of being able to enjoy all aspects of life within a short walk from home, there are plenty of other benefits.

The health of a city district’s population will improve. Studies have shown that residents of more walkable neighborhoods had healthier bodies. In fact, residents of areas with limited walking space had an increased risk of developing cardiovascular problems by as much as 33%.

As more residents take up walking or cycling and shift away from cars, air quality will also improve. Poor air quality leads to many health problems and can lead to death. Particle pollution can trigger asthma attacks, cause strokes, lung cancer, and more.

Environmentally-conscious neighbourhoods are able to command higher property values than those in less-desirable areas. Gentrification is a double-edged sword however, as it’s important that communities aren’t forced out by rising house prices.

Residents and businesses alike will enjoy improved economic circulation within their neighbourhood. Businesses in particular will experience an increased and loyal customer base, all thanks to the 15-minute city idea.

On a personal level, citizens will be able to save a significant amount of money. For example, the average cost of owning an maintaining a car in the United States is around $6,697 for a small-sized sedan. The average running costs for a bicycle is significantly lower. Walking, as you can imagine, is even cheaper.

Areas with more pedestrian traffic have been found to be safer than those with lower walking statistics. Studies have also shown that people who spend less time traveling by car generally spend more time engaging in community activities.

Closer communities have proved invaluable recently. At the height of the COVID-19 pandemic, communities have come together to help one another, and the real worth of cultivating strong community spirit has become clear. Social cohesion and inclusivity is also a key part of every human’s mental well-being.

Are you a solution provider?

Do you want to support cities become a 15-minute city? Then check our Smart City Tender Service!

How Do You Transform A City Into A 15-Minute City?

The benefits of the 15-minute city are clear but creating a hyper-local community isn’t something that can happen overnight, and it’s also not realistic for some urban settings. Some cities may require larger radiuses, such as Melbourne’s 20-minute city approach. Others may take more drastic approach to implementation, such as Barcelona’s Superblock initiatives.

No matter which direction city planners take, there are few initial ideas that urban developers can implement to help pave the way for 15-minute city in the future. These fundamental principles can lay the foundations for 15-minute neighbourhoods to grow organically. 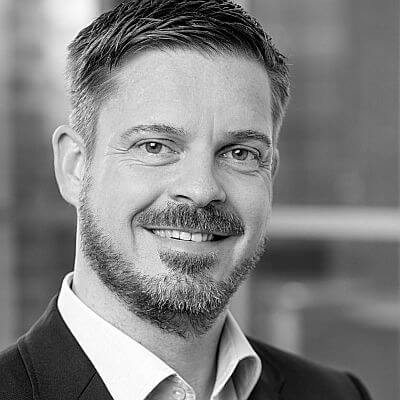 “Cities should start by harvesting ‘low-hanging fruit’. By adapting or replicating the best practices of other smart cities and communities, quick wins can be generated with minimal resources, providing more time, money, and personnel for follow-up projects. Urban transformation into a 15-minute city is an ongoing process, and not accomplished over night”, states Thomas Müller, Managing Partner at bee smart city.

Repurposing roads for pedestrian walkways, cycle paths, and green space is crucial to improving the walkability of an area.

When car usage is unavoidable, use smart technology to reduce the impact these vehicles have on city districts. Use smart apps that can lead drivers to their destinations via designated driving routes and to guaranteed parking spaces. Install smart delivery systems that allow for streamlined deliveries that reduce the number of vehicles needed in city centres. Together, these small changes can lower CO2 emissions within a neighbourhood.

New structures should be built with multi-functionality in mind. New architecture can be designed for a myriad of purposes, rather than for single-use applications. For example, a new commercial development could serve more than its primary function. An office block could contain a theatre, or a theatre could also house a sports facility.

Transforming existing neighbourhoods into "15-minute city" communities shouldn't be hurried, and dramatic changes can’t be expected overnight. However, by introducing smaller changes, replicating small scale successes from leading smart cities, and focusing on the needs of city residents, it’s possible for local governments to sow the seeds for a brighter, smarter future.

Join the global bee smart city solution network and check out best practice solutions. The free solution platform features hundreds of solutions that have been implemented in cities and communities across the globe. Join thousands of members and contribute today to the community! 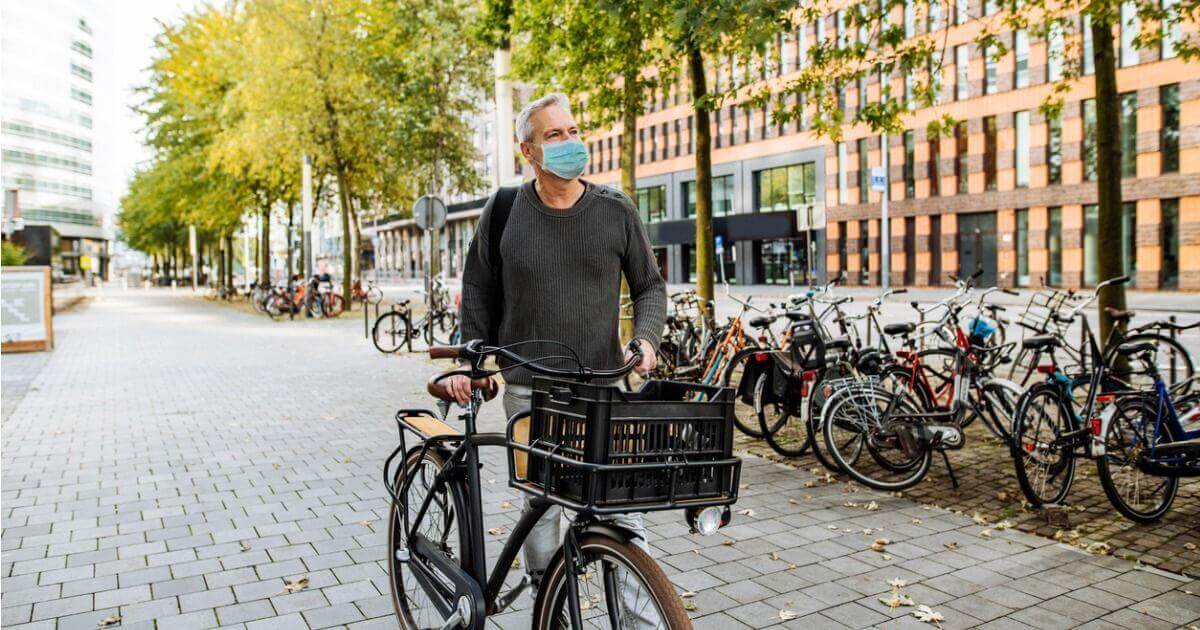 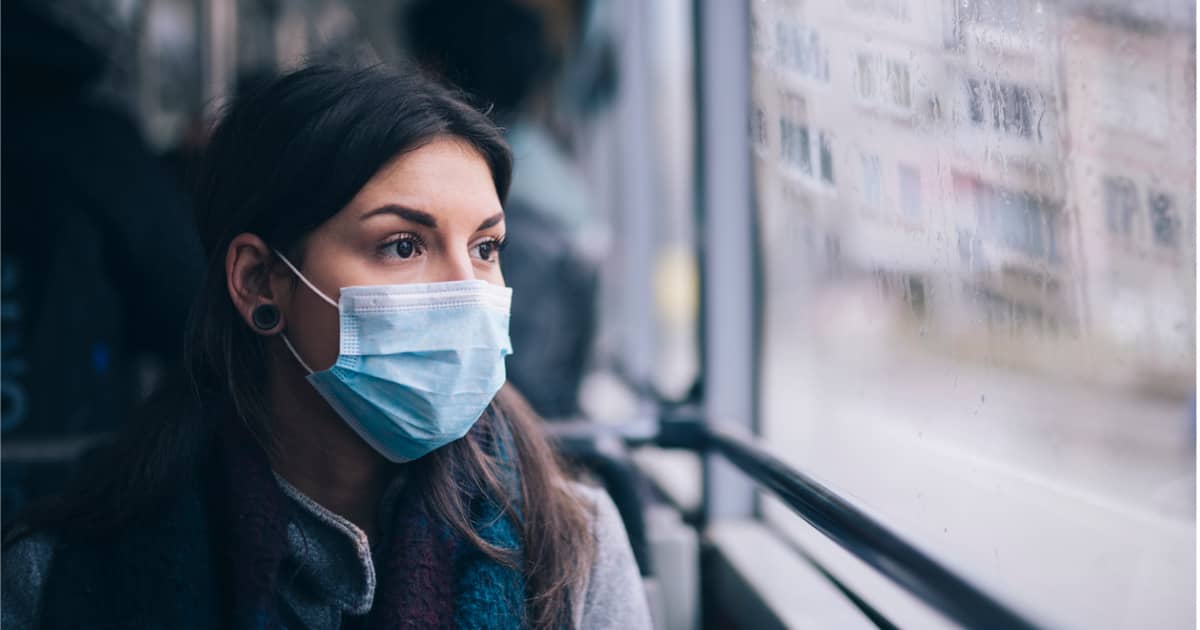